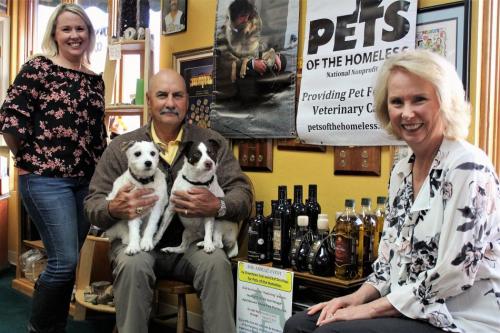 This time of year, the Nevada state capital is filled with traditions. One that has grown especially endearing to the Carson City community is the annual Pets of the Homeless fundraiser presented by Carpa Nevada, LLC and Downtown Coin.

Chef Don Pepe Paz, “The Paella King” and owner of Carpa Nevada, is once again donating the profits made from sales of his fine Portuguese olive oils and balsamic vinegar to Pets of the Homeless, a Carson City-based 501(c)3 registered non-profit with a nationwide outreach.

The fundraising sale began Thursday, Nov. 1 and runs through Jan. 31, 2019. Olive oil and balsamic vinegar products can be purchased individually or by the case at Downtown Coin, 111 W. Telegraph in downtown Carson City.

Three different types of olive oil are featured, each for $16 a bottle, as well as fine aged balsamic vinegar priced at $20 per bottle.

Downtown Coin owners Dan and Trish Wilson, who have opened up their business each of the last four years now to host the fundraiser, said they are hopeful sales will generate at least $1,000 this year for Pets of the Homeless. The three-month long event raised a little over $800 last year.

Regardless of the donation, Pets of the Homeless Founder Genevieve Frederick said her organization is grateful for any amount given.

“Any amount helps, no matter how small,” she said.

Funds for Pets of the Homeless go directly to pay for the veterinary, nutritional and other care of pets of homeless individuals across the country.

The numbers alone are indicative of the sort of impact Pets of the Homeless is having on America’s homeless population.

To-date, Pets of the Homeless has collected more than 602 tons of pet food donations with a fair market value of $2.5 million, Frederick said, from more than 400 donation sites around the country.

Nearly $1 million in veterinary care has been paid out through Pets of the Homeless, too, giving new leases on life for about 19,000 pets that have received treatment at wellness clinics or emergency animal hospitals.

In 2018 alone there have been more than 1,000 cases with an average of about 28 cases per week, Frederick said, figures that have doubled since last year.

With a nationwide network of about 700 hospital in 45 states, Pets of the Homeless has paid out more than $337,000 for veterinary care so far this year.

Almost three-fourths of the calls for assistance that Pets of the Homeless receives end up being emergency cases, Frederick said.

Currently, there are 49 open cases in nine states: 33 in California, seven in Oregon, two each in Nevada and Washington State, as well as one case each in Mississippi, Texas, Arizona, Colorado and Ohio.

Frederick said according to the Carson City Sheriff’s Office, there are roughly around 200 homeless persons living on the streets of the Nevada capital and many more living out of their automobiles or campers.

She said around a quarter of this population is estimated to have pets, either dogs or cats.

With the increase in calls and open cases, Frederick said money isn’t the only commodity her organization is in need of.

“We need volunteers,” she said.

Volunteers are needed to perform clerical tasks at the headquarters office in Carson City, as well as handling donations that help pay for emergency pet care, food and other pet supplies.

The following Carson City businesses are designated donation sites for Pets of the Homeless:

Visit Pets of the Homeless online at www.petsofthehomeless.org or on Facebook at www.facebook.com/OfficialPetsoftheHomeless for more information.

Why More Homeless Shelters Are Welcoming Their Clients’ Pets