CARSON CITY, Nev., Dec. 20, 2019 /PRNewswire/ — The cold winter months can be deadly for the thousands of homeless people living in the United States. In 2018, more than 550,000 Americans experienced at least one night of homelessness. Of those, it’s estimated that between 10 and 25 percent have pets. Pets of the Homeless is working to assist homeless Americans and their companion animals during the holiday season. 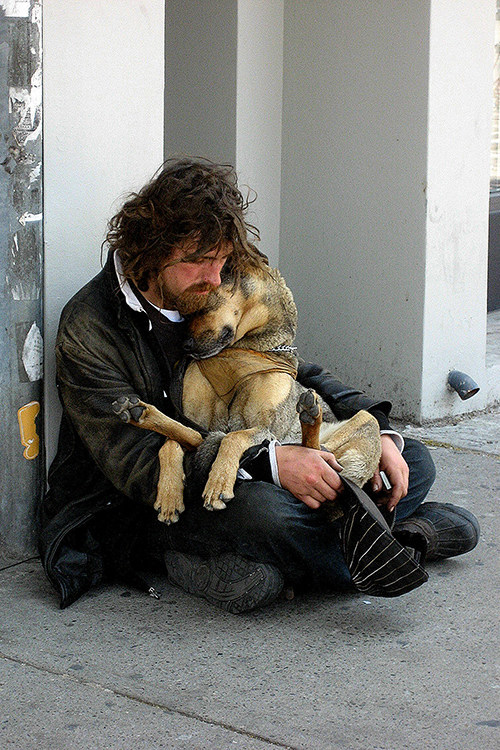 A homeless man bonds with his dog.

As one of the most vulnerable populations in our country, homeless Americans are at a greater risk for health concerns. During the winter, concerns are further heightened, with frostbite and hypothermia sometimes occurring in just 10 minutes. Companion animals face many of the same risks as their owners. In addition to frostbite and hypothermia, their paws are easily damaged by snow, salt, ice or debris. Common ice and snow removal chemicals, like rock salt and antifreeze, are poisonous to animals and humans alike.

Often times, a pet is the only friend, warmth, and security a homeless person has. Homeless Americans with pets are often turned away from shelters, soup kitchens, or other places they could seek assistance. Many homeless pet owners put their own needs second to ensure their pets are cared for, which makes it increasingly difficult for people to transition out of homelessness.

Pets of the Homeless is the only national animal welfare nonprofit dedicated to providing pet food and veterinary care to homeless people with companion animals. Pets of the Homeless works with shelters, soup kitchens, veterinary clinics, and more than 200 like-minded organizations across the nation to make the lives of homeless Americans easier. Ensuring that a pet’s needs are met allows homeless people to spend more time focusing on getting their lives back on track.

To make a monetary donation to Pets of the Homeless, visit petsofthehomeless.org/donate. There are also many other ways to help the organization, like donating pet food or supplies to your nearest donation site. You can also enlist a new donation site. Becoming a donation site provides a place for customers and others in your community to drop off pet supplies and food, and it acclaims your business as caring to those in greater need. Pets of the Homeless will distribute a news release on behalf of all new donation sites, giving participating businesses extra promotion. It’s easy and there is no cost.

A donation in any capacity to Pets of the Homeless can make a world of difference in a homeless person’s life and in the life of their pet.

"From one animal lover to another."